Link to this page

William Trost Richards was born on 14 November 1833 in Philadelphia. In 1846 and 1847 he attended the local Central High School.

Between 1850 and 1855 he studied part-time with the German artist Paul Weber while working as designer and illustrator of ornamental metalwork. In 1852 he exhibited for the first time at the Pennsylvania Academy of the Fine Arts.

The following year he was elected Academician. In 1854 he met the Hudson River painters John F. Kensett, Frederic E. Church, Samuel Colman and Jasper F. Cropsey on a trip to New York. In 1855 and 1866 he travelled to Europe; visited Paris, Switzerland, Italy and Germany, and spent several months in Dusseldorf. 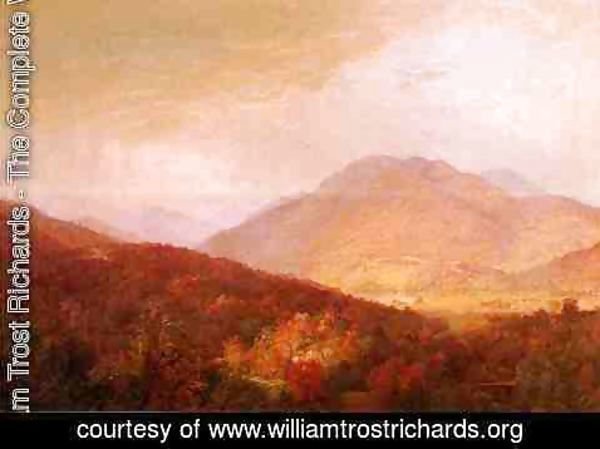 National Academy of Design and Academician

He then returned to Germantown (PA), to get married. During the summer he did sketching trips in the Catskills and the Adirondacks and in Pennsylvania. In February 1858 he attended the Exhibition of British Art ant the Pennsylvania Academy of the Fine Arts.

The following year he bought a house in Newport, and spent the subsequent summers there; the winters in Germantown. During 1879 and 1880 he spent the winters in London and the summers on the Continent. Between 1881 and 1882 he designed and built "Graycliff", a summer house in Newport. In 1884 he exchanged the Germantown house for a farm in Oldmixon.

He travelled to Europe almost every year till death, visiting England, Scotland and Norway. He died on 8 November 1905 in Newport. (Katherine E. Manthorne) (From Museo Thyssen-Bornemisza)

Report an error on this page